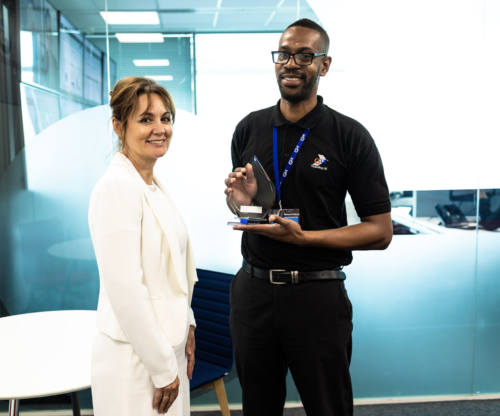 Wayne from our GUK Control Centre has been awarded the coveted Service Delivery Manager of the year by his managers and peers.  He has so far dedicated 12 years of his life to GUK and has played a crucial part in the development and modernisation of our 24/7 Control Centre.

Wayne began his career at GUK as a helpdesk controller.  Working shifts, he answered telephone calls, emails and dealt with pressing issues from the guards on the ground.  Often he was the first voice heard in an emergency, managing to use his skills and calming attitude to diffuse and problem solve.  Wayne excelled in this role and was rewarded with a promotion to supervisor level.  This saw him manage a team of people whilst also supporting new department initiatives within the company.  Wayne has always been composed in a crisis and his peers look up to him whenever a problem needs escalating.  GUK’s Control Centre became so crucial in the day to day running of  operational matters, an overall manager needed to be employed.  With his wealth of experience and knowledge there was no better person that Wayne to undertake this responsibility.

Since having Wayne as our Control Centre Manager, he has continued to show dedication and loyalty.  He regularly works late in order to complete tasks or to ensure a stable conclusion is reached.  He is respected by his peers and will always go above and beyond for any project allocated to him.

Thank you Wayne for your continued service excellence and support, it hasn’t gone un-noticed!